Trope –> noun \ˈtrōp\ : a common or overused theme or device : cliche <the usual horror movie tropes>
Soccer Mom –> noun : a mother usually from the middle class who brings her children to soccer games and similar activities 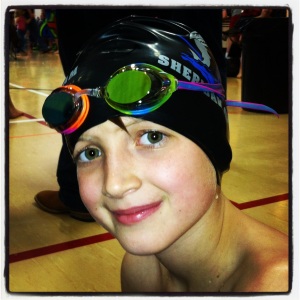 My mother told me this would happen.
When I married my husband she warned me: “Your kids will grow up in a gymnasium.” It wasn’t an insult to my athletic husband or a judgment about my inherent and persistent klutziness – it was just an observation. I married a jock. Cody has coached basketball for 14 years. He has coached junior-high Navy brats, pee-wee three-on-three teams, college freshman, and most recently high school girls. He loves athletics and will chase a ball anywhere. When our first son was born he kept a stuffed basketball in the crib and hung fuzzy soccer balls across the car seat. When I suggested that we buy our six-week-old books instead of a regulation sized football, Cody said, “I guess he can throw books too.”
Watching our kids play team sports seems to be the predominate pastime for thirty something moms. In Wyoming, we drive hundreds of miles in the snow and rain (because spring doesn’t arrive here until at least June), unfold our umbrella chairs in the wind and huddle with our coffee under blankets and beanies while the kids chase each other around a field that looks suspiciously like the one we just left behind. We’re assured that our lives are “not on hold” while our kids play; we’re “making precious memories” and “learning about ourselves.” I’m not sure what I’m learning beyond the fact that sports parents are crazy and ten-year olds are easily placated with cheap plastic trophies and orange slices. I often wonder if my boys would have just as much fun with a free movie pass and unlimited access to ice cream and caffeinated beverages.
Most of my friends don’t seem as challenged by the soccer mom trope – they have this part of parenting down. They have soccer wagons (for all of those chairs) and basketball team shirts. They seem to understand most of the rules and they know exactly what to shout across the court when their kiddo scores. They take stats and snap photos with something other than their ancient smart phone. I, on the other hand, just Googled “soccer mom trope.” 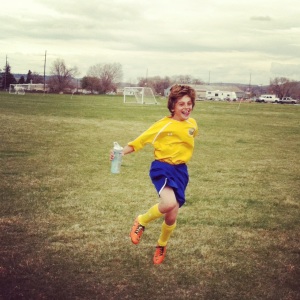 Team sports don’t always make sense to me. I am a runner and a backpacker; I like sports where I can only hurt myself. I prefer to hideout in the mountains rather than at center field with a baseball glove. But last week at a tournament in central Wyoming, Frank scored a hat trick (I had to Google that too: three goals in one game). He raced down the field to his friends who hugged and high-fived him. His coaches jumped on the sidelines and threw their fists in the air. Cody and I shook our heads in disbelief and shouted our encouragement. After the game one of the coaches stopped us on our way to the car. I expected to hear about the U10 team’s winning day; I was ready to bite my tongue. Instead, I heard about my child’s big heart. The coach told us about watching Frank repeatedly pass the ball to a teammate who hasn’t scored before. He told us that our son was leading his team, having fun, and – incidentally – learning to play soccer.
As we drove away from the field, my boys bickered in the backseat and Frank tallied his season’s goals – no signs of the big heart I’d just been so proud to hear about. I bristled and turned to look at him. He was dirty – grass stains covered his yellow jersey and orange Gatorade circled his mouth. But he was happy and tired. He’d spent the last hour running and playing with his friends. He smiled at me and drank his chocolate milk.

I think most parents know that team sports are about more than winning and losing, but it seems we only hear about the craziness of over scheduled kids and over involved parents. I’m learning to have fun on the sidelines, learning to see my kids differently. I am watching them grow into the strong, competitive, big-hearted athletes: just like their father. My mom was right. Again.