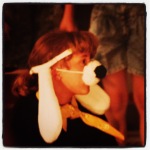 unfortunately there is a photo…

When I was twelve I played a spotted dog in my church’s holiday musical. I ran up the aisle of the old Presbyterian Church on my hands and knees, howling, and barking. I was a confident, loud dog. I loved my costume’s fleecy ears and the black sweat pants and knee pads. It never occurred to me to be embarrassed by the casting – Blooper was the most coveted role in the play. My stardom was fleeting; the singing songbook stole the show and I never appeared on stage again. It turns out I’m tone deaf and my sense of timing is frightening – I still can’t believe I was allowed near musical theater. Leaving the stage was a no brainer.

My departure from church life took a bit longer. 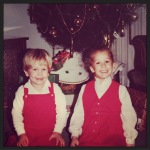 matching church outfits for Christmas circa 1982

In retrospect, I stuck around so long because of the Blooper effect. The Presbyterian Church on Main Street in Miles City, Montana was familiar and comfortable. In the 80’s it seemed like everyone in Eastern Montana went to church on Sundays. The Catholics were in and out quickly, the Mormons stayed all day, and the Presbyterians sat in the back of their beautiful stained glass chapel for exactly one hour. My family went to church early for Sunday school and singing. We stayed after church for weak coffee and sugar cookies in the Narthex. My mother attended church circles on most Wednesdays and I went to the church basement for youth group and rubbery lasagna.

But church looked different after Blooper. Most teenagers hate church, so maybe my dissent was normal. As my experience of world widened, the messages I heard at church and from church friends no longer seemed so solid. I found myself caught in circular arguments about diversity and acceptance – about certainty and concrete answers. I read about Buddhism in my AP humanities classroom. I celebrated Hanukkah with two of the seven Jewish people in Eastern Montana. I studied Catholicism and Lutheranism in Presbyterian Sunday school. I was enamored with a world of possibilities outside of my own experience. And almost without knowing it, I made a big decision about my natural approach to the world: I learned to value healthy skepticism.

I now know that my skepticism was no accident. My father set himself at the task of raising skeptical children – his quiet, unobtrusive faith highlighted life’s gray areas. My mother voiced her opinions as only her own. She was careful to give voice to lots of different ideas, “Some people believe…” she’d say before she suggested some alternative view of the world. This couldn’t have been an easy way to raise a teenager – I argued at every turn. And ultimately, my need for supportive skepticism led me away from American Christianity.

What I am just now realizing is that the comfortable cultural community that was the 1980’s church, has changed for much of the country. All too often, it seems that skepticism and doubt is not tolerated by most faith communities. If patience for doubt exists, it is temporary – a momentary separation from an inevitable truth.

But shouldn’t healthy skepticism be at the heart of faith? If we are to accept and trust that which we cannot see or touch, shouldn’t we consider all of our options? Shouldn’t we find our way to church by way of understanding and thought rather than fear? For me this is the only certainty, the only thing I know for sure about church – I don’t always need my questions answered, but I must have the opportunity to ask them. I want to wallow in skepticism, to sink into doubt, and find the solid ground beneath.

I don’t remember not liking church as a child. No one asked me if I wanted to be there – it was a given. No one asked me if I believed the stories or if I’d been saved. No one mentioned doubt. My parents talked about God in the abstract – there wasn’t a man in the clouds with a beard or a robe; God was an idea or maybe an action. My father was fond of saying, “God is a verb.”

I cling to this idea of action. It exists without the church, without the rules and regulations that disallow skepticism and doubt. And it may be enough.