My house is full of guns: Nerf guns, cardboard cutouts of handguns and double barreled rifles, wooden rubber band guns and water pistols. I walk on Nerf darts and fish Lego weapons out of the shower. Pretty typical boy stuff, but I live in Wyoming, so we have real guns too. We have a locked safe stocked with hunting rifles. The guns are not something I think about. I never open the safe. I don’t shoot small animals. I don’t even go to the shooting range. Several times a year I watch as my husband loads his guns in the truck for a hunt. As I’ve written before – hunting is part of our culture. So by default, guns are also part of our culture. I just don’t pay much attention to that part of our crazy western ethos.

I measure my days by the number of hours I can spend outside. I roam our hills everyday; I seek clear water and fresh snow whenever possible. And despite the fact that I’ve lived with hunters and guns all of my life, I hadn’t really considered hunting a worthwhile outdoor pursuit. It’s not really the dead animals – I grew up on a cattle ranch and I have a very real sense of where our food comes from. It’s not even the camouflage or the long walks.

It’s the guns. They are big and heavy and I admit it –kinda scary.

I associate guns not with my mild mannered husband slash hunter, but with violence and misplaced power. I picture automatic war weaponry instead of sleek rifles and lean, healthy meals. In reality hunting is mostly about walking and thinking and being quiet outside – all things I treasure. The gun part – while violent – is brief and necessary. But I still don’t like the guns, so I have opted out of countless mountain outings with my family.

This summer my boys called my bluff. Years ago I promised I would take hunter’s safety with them. In Wyoming in order to hunt legally, anyone born after 1966 must pass a Hunter Education class. The course was developed fifty years ago in an attempt to make hunting safer and the nationwide effort has lowered the rate of hunting accidents by about half.

We spent five evenings in the county’s National Guard Armory. We learned about hunting regulations, about game care and wildlife identification. We listened to a wizened game warden detail Game and Fish regulations. Our instructor talked about the ethics and responsibilities of good hunters. He stressed the importance of wildlife conservation and land owner rights.

And every day I stood next to a table covered with guns. The Game and Fish provides non-firing weapons for the Hunter Education courses. The bright orange guns look and feel real. I held the toy-like weapons, surprised each time by their weight and assumed power. I practiced holding the guns and waited to feel comfortable. But even after five days of thinking and talking about the guns, my hands still trembled when I had to demonstrate my skills for the course final.

Like most of the boys in the class, my kids loved the guns. They rushed to the front table at every opportunity working their way through the array of weapons. I watched as they held each gun up to their slight shoulders. They were excited while also respectful and thoughtful. But every evening on our drive home, their focus was on the plans they could make with their father and their grandfather once they were officially hunters. They loved the stories about hunting and fishing. They chattered about what they would put in their backpacks, about what they would eat, and what they would wear. The guns were a side note. 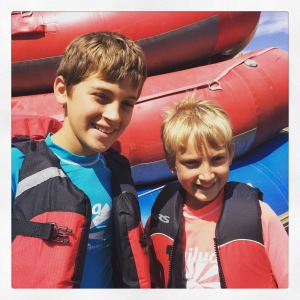 In the end the class was a coming of age ritual for all of us. I didn’t shake free of my gun fears completely, but I did learn something important: my boys have cultivated a love for the outdoors. I have hauled them across oceans, down ski hills, and through the woods. I rarely gave them a choice about being outside, and I certainly didn’t endorse hunting with my actions. I still wouldn’t choose to carry a gun through the wilderness, but I am learning to let my sons make their own way. They seemed to have learned that being outside is powerful and important. They will find freedom and space in the mountains. They will learn their limits and push their boundaries. These are some of the biggest lessons I want for them.

My boys crave time outside with the people they love – in their own way. I may never shoot a gun or apply for a hunting license, but I am grateful that I will be included in their outdoor lives.