Two semesters ago I was surreptitiously photographed in my classroom. I was lecturing about something riveting like the Oxford comma or in-text citations when a student in the back row (they’re always in the back row) held up his phone and snapped a photo. I noticed because he didn’t bother to silence his phone, so I heard that crazy digital shutter sound. Seconds later, he lowered the phone and started typing. I kept talking, but asked midsentence if he’d just “Snapchatted” me. Every other student in the room turned and gapped at the photographer. He didn’t notice; he was too busy thumbing away on his little keyboard. 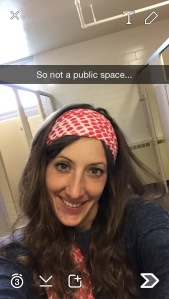 I would never have known about the then newish app if I hadn’t noticed one of my student employees taking a photo of his shoes (propped up on my desk). He explained that he and his girlfriend swapped digital photos all day long. They snapped pictures of inconsequential stuff, attached clever one-liners, and sent the disappearing photos through the ether.
“Wait,” I said. “They disappear?”
“Yep.” He gave a sly smile. I knew then that some of his pictures were more consequential than others.

Even now, Snapchat is the world’s fastest-growing social media app. Over 200 million smartphone owners use Snapchat and by some estimates, half of the world’s daily photos are taken with the app. It has been called a “safe-sexting” platform, though a University of Washington and Seattle Pacific University study shows that less than 10% of consumers use it this way. The newest millennials report using the app to capture “silly” less-than-perfect moments; they like that their ‘snaps’ don’t take up valuable storage space on their phones and that they won’t have to be forever embarrassed by their goofy poses.

So when my class was interrupted by clandestine photography, I assumed the disappearing photo included an inappropriate tagline. I was furious. Not only were my students disrupting class, but they were invading my privacy, doing who knows what with my tiny portrait. I hated Snapchat. I am happy to report that eventually the offending student noticed that class had stopped. We had a productive conversation about privacy and boundaries and taking notes. Most of my students at least feigned horror at the interruption. A week later another student took my picture. I threw him out of class.

It turns out I was wrong…mostly. Actually, I’m still not sure. U.S. law says that we have no reasonable expectation of privacy in a public place. I teach in a publicly funded community college. My classroom is open only to registered students, but the campus is public; it’s part of our community. Do I have an expectation of privacy? Is my image, considering the nature of my job, always available for public scrutiny and consumption? The courts have indicated that usually we have an expectation of privacy in our cars and in our “business offices.” Does my classroom count?
My husband and I have debated about this for hours. Even now, the mere mention of Snapchat sends him into eye-rolling convulsions. He, like many experts, says we should assume that we are always on camera. After all, most of us have video cameras in our pockets. He says my lectures aren’t private.

Still, I can’t wrap my mind around the compulsion to photograph and share everything. Especially your boring composition instructor. But I encourage students to share what they’ve learned in class, so I guess I shouldn’t be surprised when they also share their (often misguided) impressions of their instructor. Maybe Snapchat is merely the latest version of writing on the bathroom wall.

I still hate being photographed on the sly. But I do share this story with my students. It serves as a great starting point for conversations about social media and privacy. This is a discussion they are sick of having – they’ve been warned away from the internet their entire lives. They seem to understand how to navigate the world of not-so-temporary-images and most have set their own boundaries around what is acceptable. They expect to be photographed at any given moment. They expect to be able to retrieve memories and classroom notes. As usual they are way ahead of me.