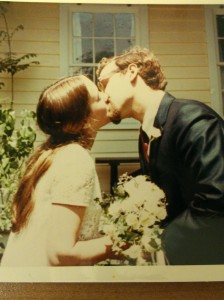 We’ve blogged for two full years now, and each year we think about trying something different. A couple of weeks ago the three of us brainstormed a list of topics about which we all had something to say, but from very different perspectives. It being February, and with Valentine’s Day coming and all, we decided to make marriage the topic for this month. All three of us are married women, but experience marriage differently because Keri has been married for 4 years, and Sarah for 15 and I for 46.

But I am finding it difficult to think about something interesting to say about marriage. I have been married to the same person for more than two thirds of my life. I have been married more than twice as long as I was not married. To say this sound staggering. I can barely imagine a life that does not include my husband. We have known each other for 54 years, more than half a century. We fell in love 48 years ago. We know each other’s flaws and strengths. We came to marriage before we finished college, before grad school, before medical school. When I look back at the person I was when I was 21, or 30 or even 35, I know I am different from those women, yet in some essential ways, I am not. I can say the same thing about my husband.

We were at summer camp when we fell in love, the same camp where we had first met when we were 13. He took me to see a tree in the forest where he had built a signal platform from which he has signaled by flashlight to someone in a tree on another hill. The platform was high in a white pine tree, and I, wearing a dress, did not climb after him, but heard his voice as he climbed the tree, telling me how close he was to the platform, and when he got there, describing the process of signaling, in Morse code, by flashlight to the other hill. I remember the deep loamy smell of the woods, the clean smell of the pine tree, the joy in his voice.

But I think I want to write a bit about the difference between falling in love and love. Sometime in my early thirties, I found a quotation from Madeleine L’Engle from her book, A Circle of Quiet. She says, “Love is policy, not an emotion.” (and the quotation might not be exact since it’s been years), but I wrote it out and hung it on my kitchen wall. I realized then that love was not how one feels at any given moment, (and at any given moment, we can be angry, we can be hurt, we can be happy) but it is about how one behaves regardless of the emotion of the given moment. I did not always succeed. I yelled at my children and my husband and often chastised myself too harshly for those things. Nor did my husband always succeed, but each of us engaged in the process of learning about love.

So I think what we both have learned over the years is that it is lovely to be “in love,” but it is even more wonderful to love and be loved.