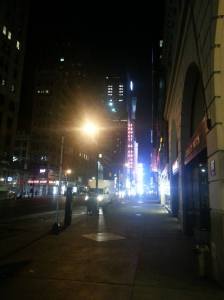 Some people would consider this unwise, but I was amazed at how safe I felt. In fact, after finishing my coffee and yogurt, I walked to Times Square with my mother’s voice repeating in my head, “Nice girls aren’t out after 10.”

I have always been a night person, but I rarely go outside that late because of the supposed dangers lurking in the shadows. I have also always considered myself a small-town girl, and I never thought I would feel comfortable in a city like Manhattan. I expected to be intimidated, self conscious, and hurried. Instead, I was energized, fearless, and confident.

As I sat in the deli, I realized that I could get used to the city life. I could imagine living there writing, walking at night, and loving the fast-paced lifestyle during the day. The other side of me–the side that loves the solitude of the wilderness, fishing, hiking, and just listening to the birds–wonders how long it would take before I would need to escape the city environment.

Despite the fact that I live in a small town, I’m not exactly a hick. I have lived in and visited urban neighborhoods before. In fact, I had been to New York before. I have also lived in Tucson, Arizona, a city of 520,000+, for over 6 years. I also lived in Lincoln, NE, not quite as big as Tucson, but still bigger than Sheridan, Wyoming. I’ve also visited Los Angeles, Minneapolis, Stockholm, London, and Paris. In Paris, my traveling companion refused to be outside after dark. Maybe that’s good practice, but I longed to see the Eiffel Tower lit up after dark. I wasn’t brave enough then to venture out on my own.

This trip to New York was my first experience in a large metropolis alone, so I was completely shocked with how comfortable I felt as I walked down 7th Avenue towards Times Square. Several people were around…men and women dressed in various styles. There were police officers, city workers, and even some homeless people out and about. I did get some strange looks…it was probably completely obvious that I was not a New Yorker…but for the most part, people left me alone, and I felt completely comfortable.

I didn’t have much time once I got to Times Square. I had to catch the airport shuttle at 3:30AM, and I still needed to check out, so I hustled back to the hotel completely energized and not really wanting to go home.

Today, back in Sheridan, I feel out of place. I tried walking at midnight in my neighborhood, but I was uncomfortable and frightened. Without really understanding why, I rushed back to the comfort of home. (It’s possible I realized internally what this study found.)

I don’t really know what to do with myself now. I suppose I’ll settle back into my “normal” life in Sheridan, and New York will be a distant memory. Until then, I have realized that no matter how much I think I know myself, I should remain open to new experiences and new places…because who knows, I may find that I’m a city girl after all.

One thought on “Are You Small Town or Big City?”