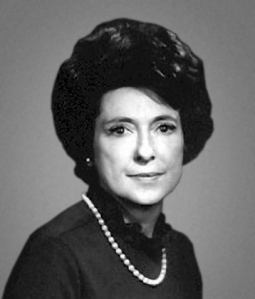 Lindy Boggs, Longtime Representative and Champion of Women, dead at 97

We Are Our Mothers’s Daughters

Marie Corinne Morrison Claiborne Boggs lived to be 97. She raised four children, eight grandchildren and 18 great-grandchildren.  She was the first women elected to Congress from Louisiana and when she left in 1990 to care for her daughter, she was the only white member representing a black district.  She cooked for thousands of people at her Washington garden parties and out-maneuvered the political elite to add inclusive language to key legislation.  She championed anti-poverty initiatives and was considered as a 1984 vice-presidential candidate.  She hosted raucous Mardi Gras parties at her New Orleans home and served as ambassador to the Vatican during the Clinton administration.  Boggs buried a daughter and a husband before her own death this July.

If I’d been paying attention, I’d have known the story of Lindy Boggs before I read the New York Times obituary that called her a “champion of women.”  I was led to the obit by Ms. Boggs’ writer-daughter Cokie Roberts.  Years ago, I read about this political family in Roberts’ book We Are Our Mothers’ Daughters, but I’d forgotten Boggs in lieu of some of the sexier profiles included in the memoir.  Fifteen years ago I was more interested in war heroes than somebody’s wife. It is obviously sad and probably short-sided to base my admiration for a woman on a high profile obituary, but Boggs’ story suggests the power of a female archetype that I am becoming more familiar with:  The Adult-Woman in Charge.

There is little doubt that Boggs’ pedigree propelled her to the top in Washington D.C.  Her family traces their political roots back to the Revolutionary War and several southern governors, but it is Boggs’ embrace of distinctly feminine power that intrigues me.   She ran for Congress after her husband died, but she remained for decades because she was smart and experienced – she wasn’t just cooking those massive meals for the Washington bigwigs; she paid attention.  According to the Times, Lindy Boggs was known for her “velvet charm.”  She hated offending people and was characteristically generous, but she held her ground and used her trademark southern manners to win over her congressional colleagues.  Though it may not have always been obvious, Lindy Boggs was in charge.

A good friend introduced me to the concept of The Adult-Woman in Charge.  At times she’s behind the scenes, cooking meals, organizing grassroots politics and soccer practice, or planning the memorial service.  Other times she’s right out front authoring legislation and leading countries.  She is competent, compassionate, and flawed, but she is always present, driving the masses forward.  The role can sneak up on a girl – rarely does a one acknowledge that she is relinquishing the role of family/world organizer, but eventually mothers and sisters and aunts grow tired and we are faced with finding food for the family reunion and running for Congress.  The job description is vague and not officially recognized, but it is necessary and as inherent as any family dynamic.  Lindy Boggs seemed to understand this concept and embrace the power and knowledge the role provided.  And as evidenced by her remarkable public service, she believed that we all should recognize the contributions and value of the world’s women.

One thought on “Adult Woman in Charge”