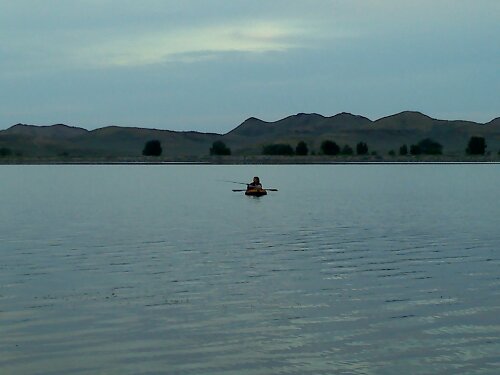 I love the water. Growing up, my mother couldn’t keep me out of the neighborhood pool. She feared the water, so she didn’t really understand the pull of it for me. But my father understood. He grew up in Minnesota, so he was raised around the water and on boats. He understood my love of water, and he indulged me when I wanted to go fishing. Even as his only daughter, he led me to the lake.

My first time to the lake alone with my father wasn’t really about fishing. It was about spending time with him. I couldn’t care less if we caught something or not. I’m sure my father knew this, but he took the time to teach me special knots and different techniques for catching different species of fish. He took the time to show me how to bait my hook and cast a line. And I remembered those lessons.

When I lived in Nebraska, fishing was my escape every Cornhusker football game. A few blocks from our house, we could hear the roar of the stadium. My mother loved the game, and she would often watch them with family and friends while I drove to the lakeside, fishing pole in hand. When I’m by the water, I am calm and content. I also can hear my father’s voice the loudest when I’m fishing.

“Nice cast,” he’d say as my lure sails in the air and lands with a plunk. “Now, reel it in slowly, but not too slow.” The water moves as my line pulls on its surface.  “There you go. Fast enough so it won’t get caught in the weeds, but slow enough so the fish can catch it.” The reel clicks with each turn and I gauge the speed, imagining the fish watching it go by.  “That’s it,” he’d say when I got it just right. His excitement showed in his forced whisper and his Northern accent.

When a fish would bite, he’d get even more excited. “There you go! You got ‘im!” I feel the pull of the fish against my line and I jerk slightly “Let him take it a bit…” I back off.  My line goes slack.  “Now jerk.” I flick my wrist. “Not too hard!!” The fish fights the hook and I reel quickly, wanting to see him. It jumps from the water–a large mouth bass, its white belly gleaming in the setting sun…and then it’s gone. My line goes slack. “Oh you lost it!!” I hear my father say.

Sometimes, the fish would make it to the boat, flopping on the floor as we both try to catch it. “You got it! That’s a nice fish!” Then he’d take the fish off the hook for me and we would decide whether to let it go or take it home for eating. More often than not, we’d let it go because it was too small. “Send us your big brother,” he’d say as the fish swam away, and we would both laugh.

I was not much of an angler back then, and even after years of fishing, I’m still not. Despite those lessons and the years spent on the water with my father, I rarely catch fish, but it doesn’t really matter. It was never really about fishing anyway. It was more about listening.

Maybe that’s why I feel so alive and peaceful when I’m at the lake…maybe that’s why I feel more like myself when I’m on or near the water. The water joins me to my past. Catching fish is just a bonus, but hearing my father’s voice in my head is the true pull–and feeling him there with me while I cast and reel in my line.

My father lives in South Africa for now, so our fishing trips are limited. But you can bet the next time we’re in the same town again, we’ll be on the lake.

5 thoughts on “Something About the Water”