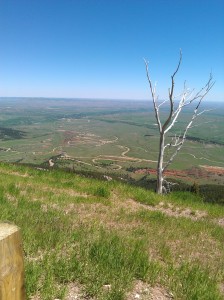 I want to write about geography, about place, about those things that makes somewhere home, about the places where we are comfortable.

I have just returned to Wyoming from two and a half weeks in mostly in Vermont, with a few days in New Hampshire. I spent many happy summers in Vermont as a teen-ager and young adult, becoming familiar with living in the woods, adjusting to the weather, cooking outside in the rain. This visit I watched my grandchildren find red salamanders called efts in the woods. I swam in delicious lake water and spent one afternoon kayaking on the little lake where my aunt has a small summer cabin.

My husband and I, both raised in the east, first traveled across the country in 1974, and I remember distinctly the visceral feeling of  “home” when we reached South Dakota. I cannot explain it, but the open country and the open sky did something emotional to me that the eastern woodlands never did.  We moved to Wyoming permanently in 1978 where we have lived ever since.

When our daughter got married in Vermont in 2004, as my husband and I drove the twisty two-lane road toward the hall where the wedding was being held, I told him that I didn’t think I would have become a writer if we had moved to Vermont instead of Wyoming.  I am pretty convinced that this is true.  The Wyoming landscape, the mountains, the birds, the dry air, the winter all appear in my poems, and stories.  I do not have the same connection with the eastern woodlands, regardless of the many summers I spent there.

I do not know how to explain this, but I know that I love feeling directionally oriented because I know the mountains are always to the west when I am at home. I can find the directions if I am out  driving back roads because I can see where the sun is and where the mountains are.  I love being able to look about at open space. I can not find the directions easily in eastern woods. I would need to climb a tree to get a view. In dense woodlands, it is hard to find where the sun rises and sets.

A number of years ago, I was driving across Montana’s Judith Basin with one of my sisters. It was early June and the hills were rich green. I was thinking about how beautiful it was when my sister said, “It’s so empty, where are the towns?”  She found the emptiness disturbing.  When we came to a wind farm, she felt comforted by the scale of it.  I found the openness beautiful and exhilarating.

I wrote a poem once about driving across South Dakota, in which I wrote “I am the tallest thing from horizon to horizon/ and I am dwarfed by blades of grass.”   As a poet, I am always trying to make connections between ideas and between images. I find apparent contradictions interesting. I think it is those contradictions that draw me here.