Obviously, there was not a blog post for everyone to see on the due date.

Those ten people who accessed the site on Monday, Oct. 8 had nothing to view.

It was my turn to post, and I have to admit, I’m a bit distracted. When you hear my story, you’ll understand why.

Warning! these images are graphic! If you don’t like blood, don’t look! 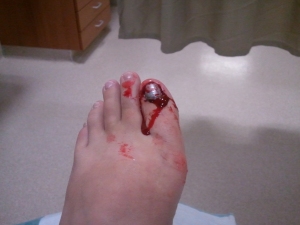 My bloody toe after crushing it with a kayak.
Photo by Keri De Deo

So here’s the story: I went kayaking again the last weekend of September. It was a beautiful day & the leaves on the trees were turning all types of colors: gold, rust, red, and sage. It was the perfect day for kayaking! Of course, we stayed out as long as possible, and ended up getting home after dark. As my friend & I loaded the kayak, it slipped from my fingers onto my toe.

Unfortunately, I had chosen to use my friend’s hard kayak rather than my own inflatable. I doubt the inflatable kayak would have done as much damage.

First, I screamed, and then I tried to be brave. Eventually, the tears had to come out–as did the blood.

The bone under the nail was crushed and the skin broken: an open fracture.

I lay on the ground as my friend called my husband. “Do you want to come pick her up?” she asked.

“I think I need to go to the ER,” I said as I watched the blood ooze around my toenail and into my sandal. So much for my old Burks, I thought. (Sorry, I don’t have a picture of those. I threw them away in disgust.)

After spending a few hours in the ER with my husband at my side, I was fitted with this really attractive boot.

It’s not all that pretty, but it does the job.

I am getting tired of wearing it.

It has another purpose, though: attractive cowboys go out of their way to hold doors open for me.

I flash them my smile and then hobble through the threshold saying a breathless thank you.

The doctor removed the nail, which is when I stopped taking photos. I didn’t want to look at it ever again.

Now, the toe is healing. There’s a small red spot where the cut had been. It still seeps fluid, but it looks pink and healthy.

Eventually, my nail will grow back, the bone will heal, and I can go about my life with the memory of having a broken toe from a kayak.

At least I was out having fun and it happened after the trip, so I got in one more river float before the season ended.

Despite this small set back, I will be out there again next season!

The kayaks wait to be loaded.
Photo by Keri De Deo