I love raspberries, so I have several raspberry bushes against my house. We started with one lone bush purchased from a nursery, but over the years, friends have added to our collection with different varieties. Now they cover nearly one whole side of the house. Some are wild raspberries and produce small leaves and fruit; some were from nurseries across the country and have larger fruit and leaves. Either way, they are all just as sweet and delicious. Every year, we can’t wait for raspberry season–forgetting the time and effort it takes to gather the fruit.

At first, the raspberries were easy to pick because there were not that many. Of course, now, it can take an hour. Frustratingly, I’ll pick what I think are all of the ripe raspberries on one bush; then I’ll move away to the next section and start picking those, only to look at the section I just finished and see more ripe raspberries on the other side. I often fail to see every ripe raspberry from a single perspective. It takes moving around and examining every inch of the bush to see them all. 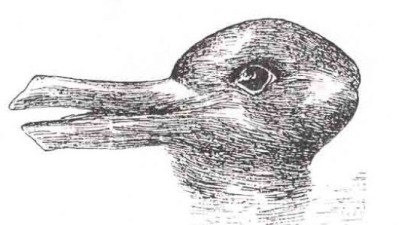 This seems to be true about life and its many facets. We see an issue, an experience, and even a person from one perspective and think we understand it, but as we approach it from another angle, our perspective changes and so does our view. I’m sure most of you have seen the image of the duck/rabbit as a lesson in perspective. It depends on how you look at the picture (or an issue) as to what you see.

Because of this, it always amazes me at how many people think they know the “right” answer about something despite not understanding the whole picture. Most recently, I see this in the Wisconsin shootings over this past Sunday.

Wade Michael Page allegedly killed 6 people and injured 4 people in the Sikh Temple of Wisconsin. Just like in the shootings in Aurora, CO and in Tucson, AZ last year, gun control debates have ensued.

Nothing demonstrates the intricacy of an issue such as gun ownership. Consider the complexity of the Second Amendment:

A well regulated militia, being necessary to the security of a free state, the right of the people to keep and bear arms, shall not be infringed.

Try diagramming that sentence. Which of these phrases connects to the verb phrase? Which right “shall not be infringed”? Should it be a “well regulated militia [that]…shall not be infringed”? Or is it truly the “right of the people to keep and bear arms…shall not be infringed”? There are those who argue that the Second Amendment allows for gun control (“well regulated”), and some who argue that nothing should “infringe” on a citizens’ right to “keep and bear arms.” However, can one really argue that the public needs to own semi-automatic rifles? Or machine guns? What is the purpose? And if, in fact, the Second Amendment does not allow for gun control, how do we stop these killings? How do we stop the violence?

Most of all, it’s sad that this week has turned into a time of mourning rather than a time of national celebration as the Olympics near the end and as another rover lands on Mars. At a time when we should have some national pride, people are grieving and lamenting over the anger and intolerance that still exists in our country. Maybe it’s because I’m paying more attention these days, but it sure seems to me that there’s less tolerance for differences and disagreement. Instead, everyone is clamoring to be heard and arguing that they are right.

(This sign displayed at a chiropractor’s office provides the best advice: “change the way you look at things, and the things you look at will change.”) 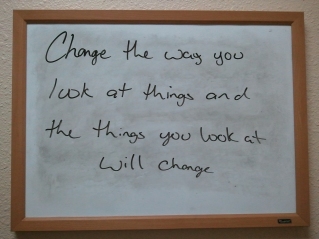